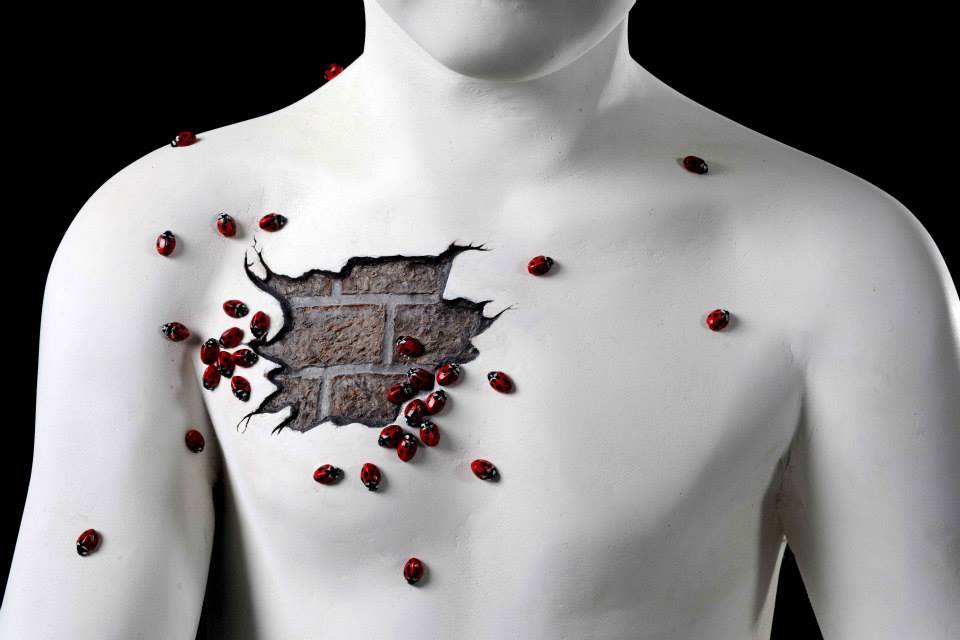 Through my work I aim to communicate the human condition from as many angles as I can see. I often draw upon elements of folklore and mythology, as I believe that certain stories carry age old truths woven into our collective sub-conscious which often have moral, emotional and physical relevance, regardless of time period or cultural status. I am drawn over and over again to using the human form as my starting point. as I believe that the physical body can and does communicate in a universal language. Each of us communicates using body language on a daily basis, often involuntarily, therefore it is a pure truthful language often revealing emotions that we would otherwise choose to hide. My figures are deliberately distorted, they come from another realm, my own personal world. Their forms also attempt to re-write our often limited views of what is considered beautiful. They are subtly rebellious.
I believe that the imagination is the channel by which the subconscious communicates with the conscious mind, and I believe that symbolism and metaphor are the languages that it uses. Therefore I freely allow my imagination to come up with scenes and concepts which I then turn into an object or image. My sculptures and paintings can be interpreted in the same way as one would interpret a dream, objects, creatures and positions carry hidden meanings to be unraveled. The subsequent narrative which I see developing is the plot line of my attempt to rationalize this world and my existence with in it. My work often deals with memory, loss as well as hope and the celebration of life itself. I love working with clay and I feel that the process of firing is something akin to alchemy, changing one substance into another. It allows for experimentation and always comes with the element of potential loss, making it a delicate and often heartbreaking art form.
I also love working with bronze, I love the excitement of the foundry process and I like the permanence of the material. I know that after I am gone, there will be a little of myself immortalized in my sculptures.